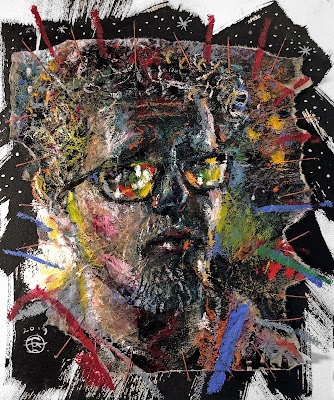 My friend of many years, the painter Fraser McIver, died suddenly and unexpectedly a week ago today at 59. In shock, I spent some time reading through the hundreds of emails and texts we'd exchanged over the years, and in the most recent from a few months ago he'd invited me — again — to spend some time with him drawing and painting together at his studio, a magical, off-the-grid place he'd created in a converted caravan on the banks of the Crinan Canal in Argyll, Scotland. I answered, as I always did, "Someday", or words to that effect, and this time he warned — chillingly in retrospect — that time might not be on our side. I took that as a middle-age rumination, the kind of thing I'm prone to myself at 56, but maybe he knew, suspected, or just wasn't feeling well... I don't know.

When I heard the news, I reacted as I usually do to such things — by grabbing something and beginning to draw or paint, this time scribbling my own face on a fine sheet of Ingres paper, crumpling it up, ironing it flat, stitching it to watercolor paper with red thread, and working the resulting 'collage' aggressively with oil pastel. Fraser would have liked this one, I think, or at least he would have had something interesting and challenging to say about it, something that made me understand my own work in a different light and context, as he always did.

"Crumpled Self-Portrait (for Fraser)"
https://www.philipgladstonestudio.com/pg-studio-store/Sketches-and-Studies-c36205850
Posted by Philip Gladstone at 11:35 AM No comments:

News of a Friend 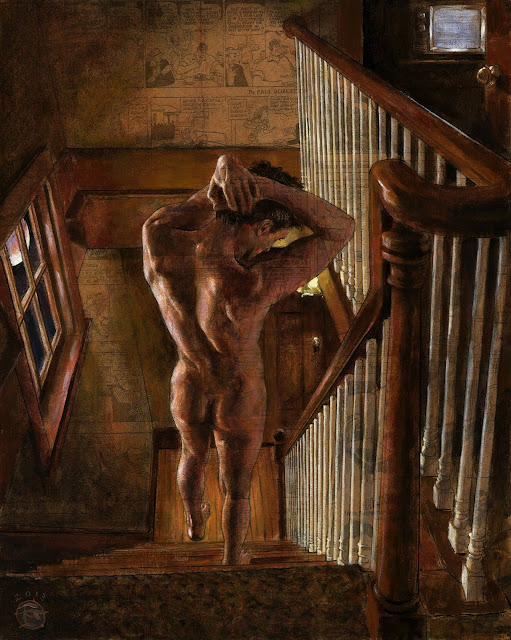 The late critic Roger Ebert said, in order to explain his decision the be so public about his illness, surgeries and new appearance, that "We spend too much time hiding illness". I took that to heart, and I've tried to be as open about my own experience with cancer as I can make myself be - it's been therapeutic for me, and I know that it's helped several people face an illness that can feel so isolating.
But the death of Robin Williams - the death of anyone who lost the battle he waged affects me deeply - made me realize that I'm still less than open about the other challenges I've faced, challenges that carry a prognosis that is at least as potentially deadly - the illnesses of addiction and depression. It's been more than a decade since I've had a drink, about half as long as the period of sobriety that I understand Robin Williams fought for and enjoyed before he relapsed, and I know that I need to be vigilant every single day, and that there are no guarantees. Like Robin Williams, I too once attempted to end my life, several years before I began my art career and I was losing my battle with alcohol - if I had succeeded all the paintings on this page never would have been. I found a way, after much struggle, to manage, if not eliminate, my tendency toward depression - my work. (I hesitate to emphasize my depression out of respect for the many people I've known who face a far, far worse battle with depression... addiction is a much more important part of my story.) Sometimes I wonder if work hasn't become a substitute addiction, too - but I think that's okay, whatever might happen tomorrow I've beaten the odds, and I think as long as I keep doing what I'm doing I have a decent chance that my good fortune will continue.
Last year, I received news that a person with a personal connection to me, the son of a collector who has become a dear friend, had tragically lost his battle and succeeded in ending his own life. As always when I learn of such things, the news affected me profoundly, and this time even more so because it was particularly close to home. I painted this picture - "News of a Friend" - both in his memory and as my attempt to deal with my own emotions, questions - why him and not me? - and the memories it stirred up... it helped. And then I kept working.

"News of a Friend", 2013; acrylic on vintage newspaper mounted to canvas, 16 by 20 inches (Sold, private collection)
Posted by Philip Gladstone at 1:37 PM No comments: